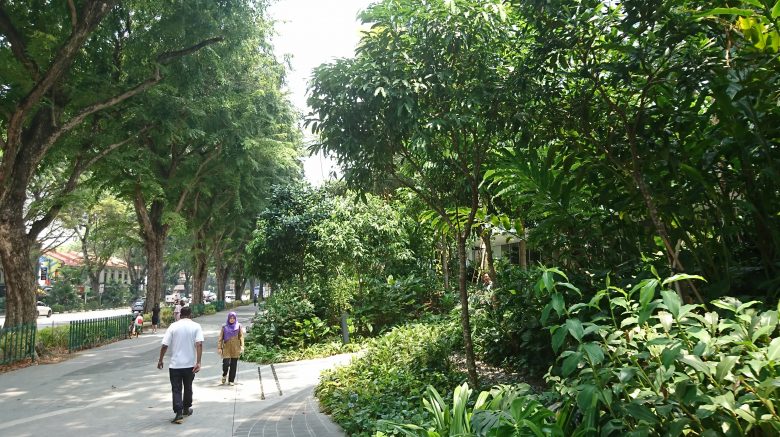 Singapore has been known as a city in a garden ever since the government coined the vision and term “garden city” in the 1967. It has pursued policies to expand new green infrastructure and replace any that is lost due to urban development – taking advantage of its tropical environmental; and they have been successful.

In 2020 46.5% of Singapore’s land was covered in green space, with a tree canopy percentage of almost 30%, one of the greenest cities in the world; with over 300 km of green corridors as part of the city state’s ‘Park Connector Network’.

In addition to the focus on urban green space, public transport has become an emphasis for the city state due to the countries small geographical size – so private motor vehicles could not be the dominate mode of transport.

This has led to a focus on enhancing public transport, cycling and walking as means of transport, which Singapore have linked with their urban green space (UGS) development and protection policies and practice. Of which a now fundamental feature is the Park Connector Network, started in 1991 and created as part of the city’s Greening and recreational strategy.

What can cities learn from Singapore

In summary: Singapore has protected green space in its development strategies and practice since its inception as a country. This has resulted in one if the highest rates of green space globally. In addition, the combining of walking infrastructure with green infrastructure both leads to more comfortable walking environments but also wide spread access to urban green space. The island state’s current policies that prioritise walking and greenery must remain in place to ensure this trajectory continues into the future.