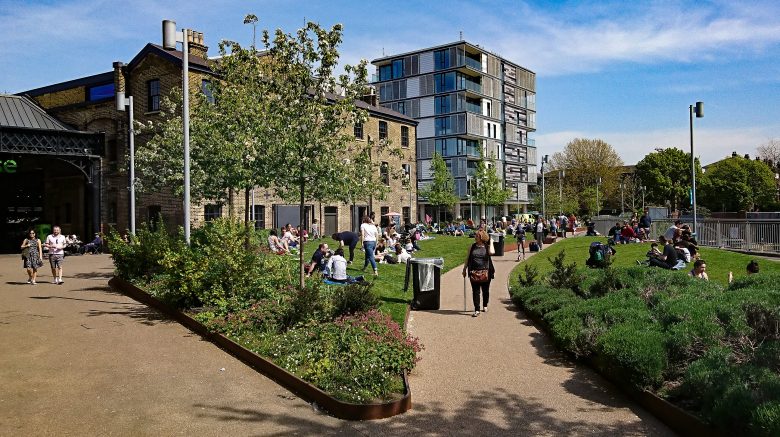 It is common knowledge that walking is good for human physical and mental health, but what has been neglected for the majority of the 20th Century is that facilitating walking by building walking friendly places is also great for the health of our cities and communities.

There are a huge amount of localised environmental benefits for designing cities around people and walking rather than motorised vehicles, as has been the case for the 20th Century. The now increasingly widely researched negative impacts of traffic related air pollution on the urban environment are pushing the argument for more walking friendly cities.

World Health Organisation data estimates that ambient (outdoor) air pollution of which the majority comes from Transport leads to 3.7 million premature deaths worldwide. Through negative impacts on heart, lung capacity and cancer. Research has even shown that children that grow up in rural areas have greater lung capacity than those in more polluted cities.

These localised negative health impacts of high motor vehicle use in cities highlights the importance of more sustainable and cleaner transport modes for the health of cities, such as walking, cycling and public transport.

On the other hand, walking as a mode of transport has the least impact on both the local and global environment, and therefore should be seen as a key part of improving both our cities localised and global impact on the environment. In response, the UK’s National Institure for Health Care & Excellence (NICE) has created guidelines on how to reduce emissions and exposure to road traffic related air pollution with major recommendations and the key pathways being to promote active travel and walking friendly cities and places.

Sociologists and anthropologists have for decades been studying the impact of car focused urban design on urban communities. The infamous study in 1972 by Appleyard and Lintell in San Francisco, showed that the higher the volumes of traffic on a street were, the less likely residents were to have friends or acquaintances on that street. Whilst all perceived aspects of livability also reduced with increases in traffic levels.

This highlights the huge impact that designing our cities around cars has had on segregating communities and how integrated people are with their communities. Whilst UCL research in 2017 reaffirmed that volume of traffic was the biggest impact on severance for communities – and recommended improving the walkability of cities.

There is a wide body of evidence highlighting that roads have a big role to play to community severance and knock-on effects on whether you are able to gain social capital and emotional benefits from being integrated with your local community.

The reason this is important is because the number of people you know and the number of people you call friends or can rely on has been shown to a big impact on our life expectancy; in some cases more than diet and exercise. With how connected you are to your community playing a big role in your ability to know people, the way we design our cities effects our ability to know people, make friends and reap the holistic health benefits associated with them.

In the book ‘Happy City’ by Charles Montgomery, he identifies that research into residents living in heavily suburban sprawl in the USA shows that you are less likely to know you neighbours when you walk less. This is backed up by Jeff Speck, in his book Walkable City Rules, which highlights research that the longer you spend commuting the less likely you are to know people in your community.

Whilst research in 2002 & 2005 showed that children’s emotional and intellectual development increases when they are in more walkable places.

Overall, evidence from cities across the world is showing that urban areas that are more walking friendly provide more social capital (social networks) for all ages and communities, people even report more friendly interactions when walking and as has been shown these have important impacts our personal health and lives.

Whilst we have already highlighted the vast health benefits that walking brings to individuals, there is increasing evidence that when streets are more walking friendly people do walk more and also reap the associated health benefits.

Research by Rachel Aldred on the impact of London’s ‘Mini-Holland’ programme in Waltham Forest, that included – improvements to the walking environment through adding 40 modal filters, planting 700 trees, reducing car use in residential areas, increasing pedestrian space and making it safer and easier to for pedestrians to walking and cross streets at 100 junctions – led to actual health benefits for local residents. With those living near to interventions walking an extra 32 minutes a week compared to the average outer Londoner; with an estimated 7 months additional life expectancy due to air quality and walking improvements.

The economic power of people walking and pedestrians has often been over shadowed by influential and powerful car manufacture lobbies that have influenced governments the world over to continue designing our streets around cars.

However, a growing body of evidence and research from the USA, UK and Europe is showing that people that walk in cities are more likely to spend up to 40% more over the course of a month in shops than those that drive. In addition, pedestrians are more likely to visit more shops and spend more time on high streets.

Living Streets has updated its ‘Pedestrian Pound’ report in 2018, which shows that on streets that have seen improvements to the walking environment sales have increased by 30%. In addition, Transport for London have also created an online hub called ‘Economic Case for Walking and Cycling‘ which strongly makes the economic case for walking and cycling focused street design. With the rise of online shopping and the potential death of the high streets in counties such as the UK, walking friendly shopping areas have a vital role to play.

In addition, research into real estate and property values in London has shown that the more walking friendly a retail environment is the higher rental value is, with increases of 7.5% per year.

Finally, major global employers, such as Google and Amazon, are now choosing the locations of their offices based on the walkability level of cities. Since in order to attract the best and most talented professionals research is showing that desirable locations that provide good place functions, that are walkable, sustainable and cycleable play a big role in where people choose to work and equally importantly where they want to stay and work for a long time.

In summary – designing our cities to be more walking friendly has positive impacts across all sectors, environments and elements of sustainable urban development; and therefore needs to be a key focus of all urban development.

.@fare_city's new report finds that residential cycle parking in London costs a family nearly five times as much as a car parking space.

And levels of demand are nearly *three* times greater than current provision: https://www.bbc.co.uk/news/uk-england-london-61022329