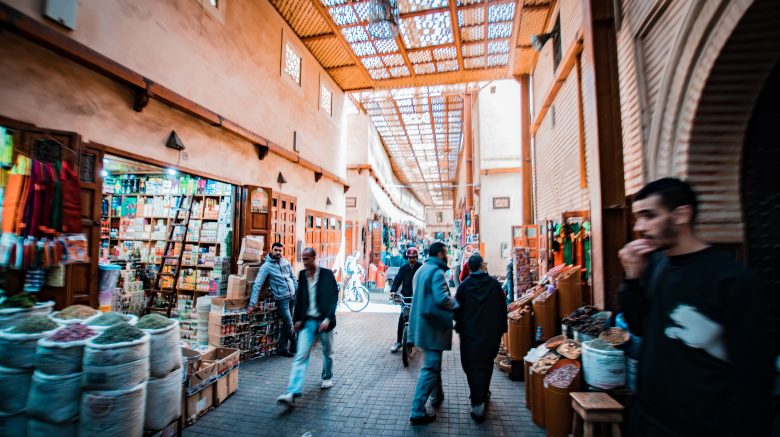 The mass of tightly knitted, narrow and mostly car free streets that make up the heart of Marrakesh’s Medina are great as a tourist for spending hours walking around, soaking up the lively Morocco culture and architecture; and whilst struggling not to get lost.

The Medina, like many others across the country (Fez having the largest car free zone and pedestrian network in the world), is mostly car free, as the streets are too narrow for cars and often not much more than alleyways. The majority of those that use the streets are pedestrians, however any illusions that the streets are only for people quickly evaporate as you hear motorbikes revving their engines and honking their horns to get through the crowds; along with quieter but equal in the number bicycles and donkey and person drawn carts. All the vehicles used either service shops in the Medina or transport Marrakesh residents across the City.

From a shared space and UK perspective, for all street users this sounds like a nightmare, with potential conflict, road safety issues and annoyance for all. However, after a short time of observation you see that everyone adapts to the environment and organically moves together through the Medina’s narrow streets; even the tourists who are foreign to the street and road culture in Morocco almost blend in.

A key question for me was who has priority on the Medina’s streets? As a pedestrian advocate and given the larger numbers of pedestrians I wanted it to be people on foot.

The answer seems to depend on location, there is a swinging hierarchy at play, with motorbikes able to drive at speed on the quieter streets, it is pedestrians that have to be weary and move out the way when they hear a bike coming. Whereas on the busier pedestrian filled sections of the Medina people have more priority with motorbikes moving at a slower pace; however still managing to push and honk their way through the crowd.

I did not witness any incidents or perceived conflict between local pedestrians and other users whilst I was in Marrakesh; tourists were another thing. Speaking to Marrakesh residents this was confirmed that conflict and collisions are rare in the Medina between pedestrians and motorbikes.

Issues – what do Marrakesh residents think?

I felt that perhaps a shared understanding that the Medina needs all users to survive; with shop supplies coming in by motorbikes and carts and the need for locals to move quickly through the centre of town is appreciated by all users. Some residents I spoke to confirmed that people accept that motorised transport needs to be able to move through the Medina and service the shops.

Residents also spoke about concerns over air quality, noise and the negative impact on the quality of the environment for pedestrians on busy motorbike sections and this is echoed from experience of walking through the Medina. One resident mentioned that a recent attempt by the government to enforce a ban cars from the main square was ignored by drivers.

Solutions to improve the pedestrian priority and environment in the Medina?

Work with city stakeholders and community groups to identify existing issues for people and common ground to work towards improving pedestrian priority in the Medina through the following options:

Can other countries learn from the Medina?

Perhaps other countries that are currently struggling with the concept of shared Space and the potential conflict that comes with it can learn from the Medina, and the way that all users manage to share such small streets and move through them organically, giving way to each other and living in practical harmony.

1/10 📢#CleanerAirMarket report. Today we launched our new report at #London's @Coinstreet✅The findings are based on our @maltbystreet pilot and serve as a #blueprint for all public markets aiming to reduce their #carbonemissions & improve #AirQuality👇
https://farecity.org/2023/01/17/cleaner-air-market-report/